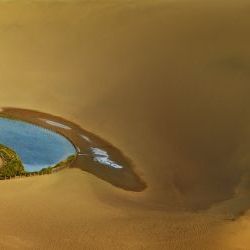 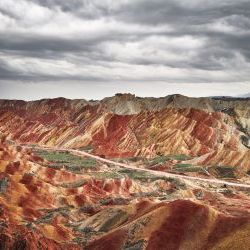 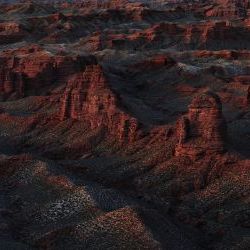 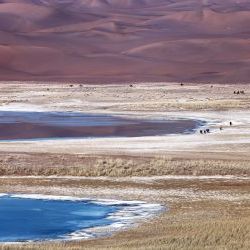 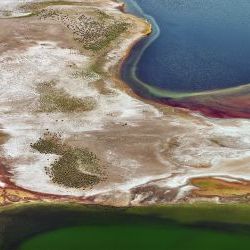 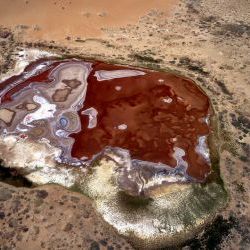 Join internationally-renowned photographer, Thierry Bornier, and embark on your very own “Journey to the West” of China to capture some of the most dramatic desert landscapes in the world.

Out in the desert of northwest China’s Gansu Province lie some of the most unique geological formations in the world. Topping the list for uniqueness without a doubt is the Zhangye Danxia National Geopark, home to the Rainbow Mountains, a colorful display of layered rock hills formed over 24 million years of natural erosion.

The sand and mudstone mountains that make up the geopark are like nature’s own sand art. Covering an area of over 400 square kilometers, it is composed of smooth and sharp cliffs, most of which are several hundred meters high, which look all the more striking and powerful against the neighboring plains and rivers. Brilliant colorful stripes lie in perfect lines, rolling over the many peaks and valleys of the landscape.

In China's Gobi Desert, dozens of lakes mingle with the tallest sand dunes in the world. This desert area makes up about 50,000 square kilometers of the region of Gansu. About half of that area gives rise to mega dunes that tower between 200 to 300 meters tall. The tallest measures 460 meters, or about the same height as New York’s Empire State Building.

Researchers have long studied these features, yet mystery continues to enshroud them.  One of its enigmas is the source of water for the approximately 100 lakes standing amidst the mega-dunes. Scientists have been analyzing the relative contributions from local precipitation, groundwater, snowmelt in remote areas, and paleowater from previous periods when the climate was wet. With climate change, these lakes will disappear very soon.

Dunhuang is located in western Gansu, an oasis in the vast Gobi Desert. Previously one of the important and strategic cities on the famous Silk Road, it has over 2,000 years of history. Dunhuang is one of the frontier towns established around 104 BC, serving as a fortification to protect against invading tribes. Centuries later, Dunhuang was the main communication post between ancient China and the rest of the world.

Christian and Jewish artifacts have been found in the area, indicating the variety of travelers who made the journey along the Silk Road. Its style and location have fascinated travelers down the ages. The Thousand Buddha Grottoes (or Mogao Caves) to the southeast of the city are a precious treasure trove of Buddhist art.

There are exquisite wall paintings and statuary. Head northwest from the Mogao Caves to the Great Wall at Yumen Pass and the Great Wall at Yang Pass to see the remnants of the Han Dynasty Great Wall in these famous mountain passes. Here, you will see and enjoy Dunhuang's amazing natural landscape.

Situated 180 kilometers to the northwest, away from Dunhuang City, the Dunhuang Yadan National Geological Park is the largest Yardang Landform yet discovered. The park stretches 25 kilometers from north to south and about two kilometers from east to west.

The park not only features the unique and wonderful scenes and landscapes of Gobi Desert, but also you will find other works of art, such as natural sculptures of lions, caravans trekking along the Silk Road, and turtles emerging from the sea. This area is referred to as the Yadan Abode of Demons by locals.

We will fly from Shanghai to Zhangye Airport (with a stop in Xi’an) and will then be transferred to our hotel and have dinner.

During these 2 days, we will discover the national geopark of colorful Danxia as well as many other spots around Zhangye.

The Danxia landforms are a masterpiece of nature, known as “Rainbow Mountains” - a colorful display of layered rock hills formed over 24 million years of natural erosion. The colorful mountain ridges are just like an overturned palette from heaven.

We will also visit the Dafo Temple of Zhangye which was built around the beginning of the 12th century, with a reclining Buddha some 35 meters long, known as "the largest reclining clay Buddha statue in China".

In the morning, we will spend 3 hours driving to edge of the desert and then we will start our adventure for the next few days.

This unique experience will leave you with lasting memories as you take in one of the most amazing deserts in the world with its unique patters of dunes that can reach up to 450 meters high.

We will drive in comfortable 4X4 cars 400-500 km into the desert and sleep in an oasis in Mongolian tents, with electricity supply to charge our camera and drone batteries.

Drone photography sessions will be included during these 3 days.

This morning in Zhangye, we will have a shoot in Mati Temple Grottoes, which is one of the most important Buddha grottoes in China. The grottoes can be divided into North Temple, South Temple, Thousand Buddha Cave, Golden Pagoda Temple, Upper/Middle/Lower Avalokiteśvara Caves and so on. Each section is less than 10km away from the others. Because the mountain was formed by coarse red sandstone, which was not suitable for carving, most of the grottoes have clay sculptures.

In the afternoon we will take a high-speed train to Dunhuang (4.5 hrs).  Upon arrival, we will check into our hotel and have dinner.

Early morning, we will shoot at the oasis Crescent Moon Lake, a pure jewel of the desert. Its water is so sweet and pure that it looks like an emerald set in the sand. The lake has been in existence for hundreds of years without ever being buried by the sand; it truly is a geological wonder.

In the afternoon we will visit the famous Mogao Caves, a treasure of the Silk Road. It is the largest and most renowned treasure trove of Buddhist art in the world and a UNESCO World Heritage Site, which includes 735 caves, 492 of which have paintings and sculptures. What you will see there is simply incredible.

Early morning, we will have another shoot at the oasis Crescent Moon Lake. After breakfast and a rest in the hotel, we will drive 200km to the geological park.

In the early afternoon we will reach the strange, eroded desert landscape of Yadan National Geological Park, which is known in the locality as “Ghost City”, because when the wind blows through, there are sounds similar to ghosts screaming .The Yadan landforms in Dunhuang have hard, light red soil covering an area of about 50 square kilometers.

The beautiful sunset in Yadan National Geological Park is a wonderful scene not to be missed. Clouds are dyed in red or orange hues, all is enveloped in bright golden light; it is quiet all around. The whole desert takes on a different appearance in the afterglow of sunset.

You will watch the sun set slowly, eventually disappearing over the horizon, and will be completely lost in the magnificent scene, marveling at the beauty and splendor of nature.

After our shoot, we will return to our hotel in Dunhuang.

After another morning in Dunhuang, we will drive to the airport after lunch and catch our flight back to Shanghai, arriving at Pudong International Airport to catch your international flight (possibly to stay overnight in the airport) for the next day. 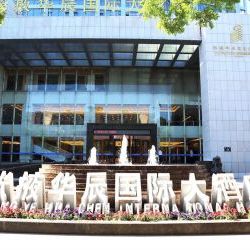 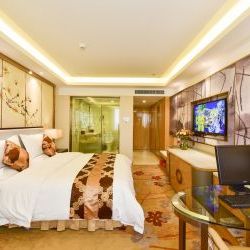 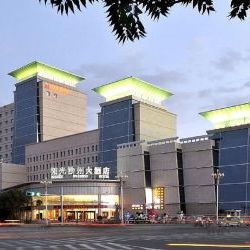 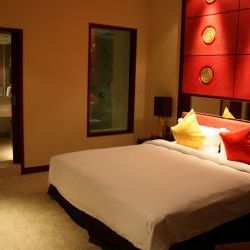